The wrappers on the Liga Undercrown cigars are not harvested right away, instead they delayed the process by 4 weeks allowing the natural sugar content to be higher which results in a richer and creamier flavor on the finished product.  Along with the Brazilian Mata Fina and Nicaraguan longfillers, the T52 Connecticut stalk cut and cured Habano binder the Liga Undercrown  cigar delivers a medium to full-bodied, complex, smooth and sweet smoking experience with hints of coffee and spice.  We have great faith in Drew Estates's rollers, and if they approve, we approve too! Try a Liga Undercrown cigar in one of the 5 sizes available (2 more sizes to be added soon) at My Discount Cigar today and see what the buzz is all about.

Read a great review on the Liga Undercrown Belicoso cigar at PUFF.com.

For more information on other Drew Estate cigars and products visit them at DrewEstate.com.

It is safe to say that the Liga Privada lines/brand are one of the most popular brands on the market. I remember when it was first released in 2007, and it was still a low profile cigar on the market. In fact, I remember in 2008 when I was up in Bethlehem, PA at Cigars International and the No. 9 was still no where near as popular as it is now. I believe I had my first No. 9 in the Cigars International Super Store while taking with Marvin Samel about the SCHIP tax, great guy by the way! Throughout the years, the Liga Privada lines have become comparable to Fuente Fuente Opus X in the fact that you can never really get them, and when retailers get the cigars in, they are gone as soon as they got there.

The Liga Undercrown line is very similar to the other Liga blends in the fact that the cigar is made with extremely limited and rare tobacco, offering the possibility for a great cigar. The wrapper to the cigar comes from Mexico and is a unique strain of San Andreas Negro maduro seed grown exclusively for Drew Estate. The harvest is intentionally delayed by several weeks to allow for additional field and sun time resulting in a higher natural sugar content and a richer, creamier flavor. The leaf is called Otapan Negro Último Corte. Otapan is the name of the vega, farm, in which the tobacco is grown, and Último Corte is Spanish for last cut, and is a reference for the delayed harvesting in which the tobacco is cut. The binder is the same wrapper that is used on the T52, and is a Connecticut River Valley Stalk Cut that is cured Habano. With all that great tobacco listed so far, we now look at the filler which is composed of selected Brazilian Mata Fina and Nicaraguan Cuban Seed tobacco.

The Liga Undercrown cigar is beautiful to look at, and I love the packaging. To begin with, I love the band and logo of this cigar. The lions/dragon head with the upside down crown underneath is awesome, and is one of the coolest bands in the cigar market right now. Now the Liga Undercrown cigar itself is also gorgeous, and the wrapper has a really dark brown almost black color to it, Maduro almost Oscuro. There are some veins throughout the cigar, and it is also toothy to touch. Holding the Liga Undercrown cigar to my nose I pick up wonderful aromas of dark cherries, chocolate, wood and anise. For this review I smoked several of the Belicoso vitola formats which measures 6" and have a 52 ring gauge.

When I light up the Liga Undercrown cigar I let it get some way into the first third before beginning my review. The cigar begins by showing  wonderful notes of cream, coffee, cocoa, wood, stone fruit, nut and spice. Along with those tremendous and balanced flavors there is a slight finish of mint, and I must say this cigar is amazing. The Liga Undercrown Belicoso cigar is burning wonderfully, and it has a perfect burn line. The ash is very white, and is very firm on the cigar. It is a solid medium smoke, and with all the flavors balancing one another the cigar is tremendous. I must say that this first third is really impressing me, and when I first read about the cigar I was not to sure of it given the hype, ... I was wrong.
In the second third of the cigar the flavors are remaining strong and the cigar is so enjoyable. The flavors are fairly similar to that of the first third, but because of how complex the cigar is I am picking up new flavors here and there. It begins by showing lovely notes of almonds and cedar, and then I begin to get hints of rich cream and espresso before getting a soft spicy and sweet finish. This is an incredible smoke, and I am loving the flavors that it is getting off. The smoke is still a constant medium, and wonderful and easy. The burn line on the cigar is absolutely gorgeous and I am still holding on to the tight white ash that I have had from the beginning. I am finding this cigar to be their best yet, better than the No. 9 and T52. I know some will think that is crazy, but it is very consistent and flavorful, and this is more my type of cigar.
I am coming to the end with this cigar, and I am ready to light up my fourth Liga Undercrown Belicoso cigar by Drew Estate. I have been smoking the Liga Undercrown Belicosos all day, and every one of them has provided tons of flavors and a great strength. There is a return of the mint flavors that I had in the first third, and it is paired wonderfully with the cocoa, stone fruit and cream notes I am getting. The finish is of spice and a soft sweetness, and every draw is amazing. Throughout this third I was getting coffee and nutty flavors, but they were very subtle. The cigar is still smoking around medium body and when I get it down to the nub, the cigar is still burning cool when I put it down. The ash was still holding strong throughout the smoke, and even though I put down the ash from earlier I am sure the white ash could have held on much longer.

The Liga Undercrown Belicoso was a wonderful cigar, and I will say that I was very surprised every time I lit this stick up. The cigar was packed with wonderful flavors throughout the smoke, smoked wonderfully, and was always at a constant medium strength the whole way through. I will say that I think this is the most consistent cigar of theirs I have had, and it was one of the best made cigars I have had as well. I love that this cigar was very complex with its flavors. The cigar didn't change character dramatically a lot, but what it did do was constantly provided you with tons of flavors making you have to really take your time and analyze the smoke. I think this line is going to be very popular, and deservedly so. The pricing is perfect on this cigar, and everything about it yells quality! My only concern with this cigar is that it might some day turn into the rest of the Liga Privada lines and become very limited, but if that does not happen this will be an amazing cigar all the time. I look forward to trying all the other sizes, and also look forward to reviewing it again in a couple months. I am giving the Liga Undercrown Belicoso cigar a 93 and I love the Mexican San Andres wrapper on this cigar. Great job Drew Estate, continue your great work! 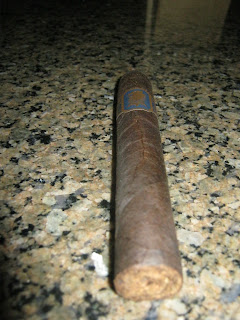 Thank you for the indepth review Seth!!!